Meet Yadian, he is 6-years-old and in remission from stage 3 Wilm’s Tumor!

I got a call from his pre-k teacher stating that my son’s urine had blood particles in it. I immediately left work and took him to his pediatrician. When he was asked for a urine sample there, there was no urine, only blood, and from that moment I knew something was wrong. They told us to get some sonograms the next morning because it might’ve been kidney stones, which I didn’t understand because my son was barely a soda drinker. Next day, we get the sonograms and 30 minutes later, I get a call from his doctor stating that Tampa General Hospital had a bed ready for him and that I needed to rush over there. I had lost my mind and called everyone on my contact list to help me get rid of my anxiety.

We get there and they run a bunch of tests and say they are going to get back to me that night, but they didn’t, and I was a wreck all night. Next day, the nephrologist comes in and says, “I have the hematologist/oncologist here with me, or in other words, the cancer doctor.” My world collapsed as now I had to explain to my 4-year-old that he has a monster trying to eat his kidney.

The tumor was supposed to be 2 inches big. The day of surgery comes, June 14, 2018, and a surgery that was supposed to be 4 hours ended up being 7 ½ hours long. In my head, the worst thoughts came through. The surgeon comes out and tells us the tumor was bigger than expected it was 15 cm long and 8 cm wide. So on and so forth, days go by in recovery at the hospital, he gets stage 3 Wilms’ tumor, and so the kidney was gone and cancer had took over. Treatment starts and he has 7 months’ worth of 3 different medications for cancer and 6 straight days of radiation. There were good and bad days. It was particularly hard for him as he started his medication and radiation on his birthday, June 25, and he was terrified of doctors at that point. Months go by and now he lost his hair; he was upset about that due to his beautiful curly hair. He became fragile and couldn’t play like others. He felt like his childhood was taken away. Every Thursday of every week was spent getting chemo at the hospital.

At 5 years old, my son was diagnosed with depression. It has been a very rough road for him. But today (August 12, 2019) my son is considered cancer-free! We have a few problems here and there, like some nodules have been found and we’re hoping that it’s not a relapse. He is left with one kidney, so his sports activity is limited, but he’s happy he fought through and beat it! Now he wants many other kids to beat it and he sees that he wasn’t alone. Many kids are unfortunate like him. Life for us changed forever but it might’ve just made both of us stronger. Cancer sucks but we found people in our situation that understand and made a family out of them, we are so happy we are not alone! 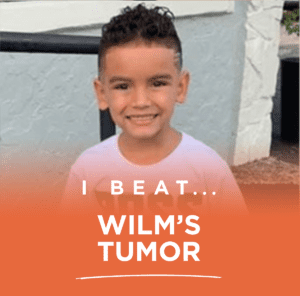